The ugly face of human nature

The documentary film Blood Lions shines a spotlight into a dark corner of the human psyche, one that is driven by vanity, and fed by greed.

In South Africa there are an estimated 8,000 predators held in captivity, most of them lion. The animals represent a lucrative income for their captors. Until now it’s a story that has been untold. 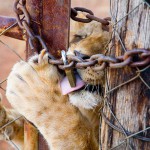 The life cycle of a captive-bred lion:

Days after birth lion cubs are taken away from their mothers to encourage the latter into estrus again. The cubs are then fed and nurtured by unsuspecting ‘volunteers’ who pay handsomely for the privilege. While the animals are still young many members of the public are attracted to the ‘lion petting’ and ‘walking with lion’ experiences that are sold by the lion farms. Although these activities tap into a deep longing in the human psyche to reconnect with nature they’re not natural by any means.

The breeding lion are often kept in squalid and cramped conditions where inbreeding deformities add to a long list of human induced abuse.

Once their size excludes them from being cuddled and walked with young adult lion are destined for two further revenue streams:

When past breeding age lionesses are shot and their bones are sent to Asia as a substitute for tiger bones which are then consumed as a status symbol or as a phony Viagra.

They’re lion bones, not tiger bones, neither of which has any effect on human libido. As far as being a status symbol one would think that any old bones could be sold to such gullible and ignorant people who think that consuming ‘tiger bone wine’ somehow makes them important.

The male lion are advertised as trophies to sport hunters who pay thousands of dollars to ‘get’ a lion, presumably for bragging purposes back home.

There’s nothing sporting about it. The lion are habituated to humans. It’s like shooting your domestic cat and thinking that the action somehow makes you heroic.

The laws that permit these reprehensible practices are South African and can only be amended by our legislature. Like the Abolition and Anti-apartheid movements the impetus for this appears to be coming from outside the country, and like the aforementioned, captive predator breeding is immoral.

You would be right if you had spotted that both Vanity 2 and 3 are culturally non-African. Now that South Africa has 22 years of experience in self-determination you might be wondering why we’re selling our souls for foreign vanities. Time to fess up to what the mirror is really telling us.