The Kgalagadi Transfrontier Park, better known for its lions and red dunes, has another delight for travellers– traditional Nama-style polka. 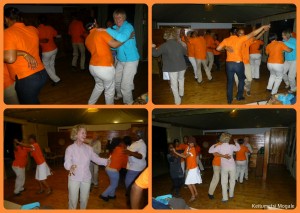 On a visit to the newly opened Polentswa Lodge we met folk from the small settlement of Struizendam in Botswana. Here they are employed as camp staff. Although the service we received was impeccable it wasn’t until our last night that we discovered how truly delightful they are.

As our tastebuds were held hostage to dessert the soft scrapes of furniture being rearranged in the lounge gave clues as to what was in store for us.

The Struizendammers are descendants of the Bushmen and Nama people who have lived as hunter-gatherers and pastoralists in the area for millenia. Many still practice the old ways following the tsamma melon trails and maintaining the wellpoints known to their forebears.

Life in the Kgalagadi is hard and the advent of a new tourism venture means another source of income for these inhabitants of the Great Thirstland.

“Being in tourism means we communicate with tourists,” says Shelby van Wyk, a waitress at the lodge. “It means we learn not to be scared of them.”

Realising that I may appear as fierce as a Kgalagadi lion to her I felt a connection with Shelby. Who has never been afraid of another? And the thought-thread unravelled further: it is always under the harshest conditions that humanity shines brightest.

After tea and coffee were dunked and drunk we were invited to move into the lounge where the couch had been reversed and a dance floor cleared. Someone cranked the ghettoblaster and we were given a display of the traditional polka dance of the Kgalagadi – similar to its Bohemian original but with additional African flair.

As we tapped our feet and took photos a hand snaked in from the edge of the frame and gripped my wrist. I looked up into a beaming face – Shelby’s – as she hoisted me onto the floor. One, two. One, two. I glanced down at her feet to try and get to grips with the steps. It didn’t matter. Everyone was laughing as we flew around the floor.

Tourism has many benefits, not least among them the meeting of cultures on an equitable stage. The next morning I asked one of my dance partners (yes, there were several after Shelby) if he was stiff from the dancing. “No,” he replied. “I’m used to it. We do it all the time at home.” The confidence that the dance had activated shone on.

The Kgalagadi has much to offer travellers. Dancing the polka with the Struizendammers was one of the highlights of our trip there.