It was Heritage Day and full moon. And then someone reminded me that it was also the spring equinox, the time of cosmic equilibrium.  Well that did it.  A magical veil drew down as I stepped into the past, and the Land of Molten Metal – Mapungubwe. 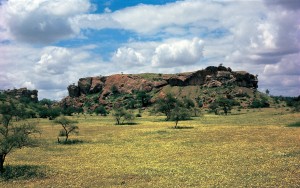 More than a thousand years ago, while Europe was still caught up in the Dark Ages, a golden light shone over southern Africa. A civilization that had trade networks extending as far as India, Indonesia and China, grew up around a hill overlooking the Limpopo and Shashe rivers.

Starting around 900 CE three distinct capitals provide insight into an evolving society, culminating in the breakthrough we know as Mapungubwe.

However, commerce and trade were merely one aspect of that period. Of apparently greater importance to those who lived around Mapungubwe was the doctrine of sacred leadership, and it is from this perspective that Mapungubwe is most notable, for it is here that we first learn of this type of spirituality in southern Africa.

The credo of sacred leadership embraces a mystical relationship between the leader and the land. The Chief rules together with his ritual sister (makhadzi). She functions as a national advisor and is kept informed of all decisions made by the council. She is also instrumental in the appointment of a new leader. In addition to the makhadzi the Chief has a ritual brother (khotsimunene) who advises on legal matters.

Sacred leadership is still part of the ideology of the VhaVenda today. The sacred leader is called the Khosi. The Khosi lives in ritual seclusion in a hilltop complex out of view of commoners. The leader’s royal ancestors intercede with God on behalf of the nation for such things as fertility and rain.

Our guide at Mapungubwe Hill declared that this was the first time in African society that such a class separation had occurred. The elite – the Khosi and his family – lived high on the summit of the hill, access to which was difficult and dangerous, up the sheer cliffs.  In separation and seclusion, the royal entourage was kept in food and water by the commoners, who lived below at the base of the hill.

When you look at the height and inaccessibility of Mapungubwe Hill it is the most extreme example of the disassociation between the elite and the commoners of all the known sites of African sacred leadership (Great Zimbabwe, Khami and Thulamela are some of the better known ones). The configurations of African society were more homogenous before, and after, Mapungubwe.

It is almost as if the leaders of the day wanted to try something new and, in so doing, achieved it by being radical. Or put another way: when a new idea is ready for presentation it often takes an excessive burst of energy for it to reach through to the consciousness of the populace.

Mapungubwe’s natural amenities made it a good choice to settle down and experiment with spiritual matters. Pink sandstone hills, like great fossil ships, dot the landscape. In the eroded valleys stand ancient baobabs – sentinels since time immemorial. Drenched in golden light the effect is other-worldy.

Mapungubwe holds increased mystical significance now that our innovating ancestors have been reinterred on top of the hill (having been exhumed for scientific purposes). Modern day sangomas and ngangas of all cultures seek guidance from these spiritualists of yesteryear.

In psychological terms differentiation in order to establish a firmer relationship is part of the process of spiritual evolution. It is essential for healthy mental development. An improved relationship with the land is certainly needed at this time in human history. Perhaps we could learn a thing or two from Mapungubwe and our Sacred Leaders. 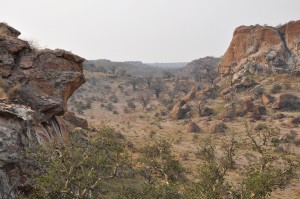