The rhythm is hypnotic. Feet come down in unison, scoring the sand, kicking up dust. Seed husks rattle and hiss around calves wiry and dry. On the periphery, silhouettes clap, keeping the beat for the dancers. A figure tosses buchu on the fire blasting mossy aromas into sweat-scented air.

We’re on Poison Mountain and the night before us is long.

Heads down the dancers rotate. Cheeks expanding and sinking like a bellows a dancer swishes a fly whisk. Swish, swish. Swish, swish. His breathing is erratic as sounds of pain or is it ecstasy, it’s hard to tell, come from him. And thus, with eyes turned inwards, he offers himself to death.

Someone is ill and the shamans of the clan are submitting themselves to the figurative death of trance so they may channel the !gi, the life-force, to heal the sick.

These are the Bushmen of southern Africa, a hunter-gatherer people, at one with the earth and the spirit.

Although modernity has overwhelmed their living culture their beliefs are exquisitely documented in the rock art of the Gifberg of South Africa. The scene just described is found in a painting on the wall of a rock overhang.

Remarkably well preserved, the painting is in two colours, red and gold. The golden bodies are shown as fused indicating unity with the !gi. Gold is also the universal colour of enlightenment.

In contrast the artist has drawn a quartet of individuals in ochre denoting the earthly exotrance work of the shamans. Their hands reach out to others in healing gestures.

Three sick people lying down have golden bodies indicating that they have been infused with the !gi conducted through the healers. In other words, the painting says, they will recover.

The healers’ bags are evident around the edges of the painting. Everyday herbs, to cure a variety of ills, could be found in them as well as special muti such as the fat from an eland’s dewlap. This was regarded as so powerful it was rubbed into the skin of the collapsed shaman to revive him from the ‘death’ of his altered state of consciousness.

Another interesting point in the painting are the groupings. The healers are shown in groups of four. Psychologically four is a number of wholeness. Think of a cross or a mandala. Mandala symbols are always derivatives of four i.e. 8, 16, 64 and so on.

Three, however, is a dynamic number indicating something in process. The patients (stressed out city slickers like us?) are in a group of three. 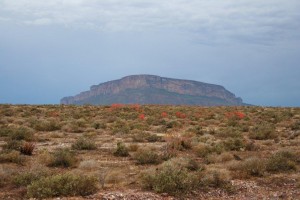 The Gifberg is deceptive. Daunting from below, from the top it appears flat, unremarkable even bleak. But look a little closer you’ll find fissures that conceal rock pools in their creases. In one sudden rush a crevice crashes into a gorge so deep and steep that only klipspringer, baboon and humans find their way. It is in these folds that the rock art treasures are hidden.

The Bushmen knew their terrain. Water attracts game and would have provided them with a welcome respite from their nomadic lives following the migrations and the seasons. The area would have been like a holiday resort for them – a place to repose, to reflect and to document their lives on the rocks.

Named after the after the poison bush, Hyaenanche globosa, an endemic, the Gifberg is a place to restore vitality, healing the strain of daily life.

A little bit of poison does you good.