I recently met with an old Bushman woman, called Ouma Khunna. She lives near the Kgalagadi Transfrontier Park, in which she was born in 1931. Her clan are known as the Khomani San and were the first people in this corner of the Kalahari.

I asked her what she preferred being called, Bushman or San. And she answered in a definite tone, “Ek is ‘n Boesman.” I am a Bushman. This apparently started a thought train going because she then went on to explain that really her people were Tsaasi (I’ve spelt it phonetically) and that she was a Khomani Tsaasi.

“Ja, ons is die mense van die tsaa.” We are the people of the tsaa.  Tsaasi. 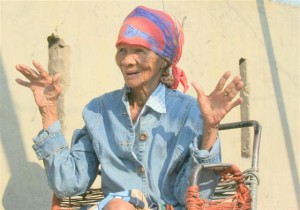 With great meaning resonating in her voice she explained that Tsaa was the eland, an antelope of profound importance to the Bushmen.  When it cries it sounds like a human being, she continued; and I understood there is a deep psychological identification with this animal.  Her lively eyes, set deep in a lined, apricot face, sparkled as she explained that an eland’s dewlap provided really good medicine.  Eating the fatty meat and wearing the skin of the dewlap would protect like nothing else.

It was so clear to me that she regarded herself and her kinsmen as People of the Tsaa, that I wondered about the other names bestowed on these gentle folk.  “Bushman” was obviously imposed by outsiders, but the politically correct “San” seemed odd, and I couldn’t really see how San would link to Tsaa. Then I thought about the Setswana name, Basarwa. The Ba prefix denotes the meaning People of.    So “People of the Sarwa” seemed closer to what she called herself.

It was time for me to go and I was thinking about a suitable farewell when the Setswana phrase “Sala Sentlê” bubbled up and came out my mouth. Ouma Khunna looked at me quizzically. “Oa bua Setswana?”  You speak Setswana?   I explained that it was very rudimentary Setswana and that I hadn’t practiced for years.  But there was no stopping her.

It was like opening a dam wall. “Oh, dis ‘n besonderlike land, daardie.”  It’s an exceptional country, that.   If she wasn’t so old, she said, she would go and live there.  And I knew that something had touched her in our conversation because she then opened up with a very personal story.  I could see her relatives were nervous about the reception the story would receive.  Would I laugh?  Would I dismiss it as nonsense?  On the contrary, I felt extraordinarily privileged.  It was a story of such personal meaning that I will treasure it forever.

Tagged on: Bushmen, Kalahari, KhomaniSan
By Clarissa | September 23, 2009 | People and Culture | No Comments |