An experience that aids cross-cultural understanding in South Africa

We are surrounded. By whistles. And by mountains. The lemony sounds echo across the valley before us. Herdboys call and drive their flocks towards the high ground and pasture. The liquid notes of cowbells add the riff.

Dan Mkize, our guide on the Mehloding Adventure Trail in the southern Drakensberg, explains that it’s a school holiday and the boys have replaced the herdsmen who normally look after the herds. The boys, he adds, are not as skilled as the men who can drive their charges without whistles. 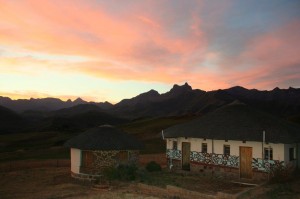 Shepherd with his herd

Tramping the trail in the southern Drakensberg

“So what are the men doing today?”

He points to a mealie meal sack hoisted up a pole. “They’re at SisiNomsa’s,” he says. We round a corner and there is a group of men sitting on a hard bench drinking traditional beer. We later see another sack, and another, in the village indicating that the shebeen is serving.

Mkize informs us that unlike the predominantly masculine names of English taverns (e.g. Boar’s Head, King’s Arms etc.), the local ones are called after the woman who brews the beer. So you’ll find names such as MamaSindi, MamaTombi and SisiModi, for the local alehouses.

Livestock rearing provides a livelihood for many people in rural South Africa. With climate change, overgrazing and expanding populations impacting negatively on the sustainability of this activity, the future is bleak. The Mehloding Trail is an attempt to reduce people’s dependence on a declining resource.

Initially sponsored by the Department of Local Government the trail has been operating since 2003 and is run by a community trust. Now, however, the enterprise must fend for itself and generate the cash to keep it going.

With the increase in demand for experiential adventure tourism the Mehloding recipe is a winner and it came highly recommended by others who had done it.

Make no mistake this is not a holiday for those who wish to be pampered. Over four days you walk 60 kms (although the luggage transport will carry those who don’t wish to walk as happened on our trail). The accommodation is in rondavels with clean and comfortable beds. The food is traditional African fare and quantities are copious. All linen is provided. Hot showers are available despite there being a dire water shortage in the area (the effects of climate change) which meant that on one occasion we had to make do with a bucket.

But what a window it is into the lives of rural South Africans. We watched a soccer match between two local teams with the colourful names of Choppa Boys and Bompas. Walking through the villages, we noticed that almost all village plots held a modern, square house as well as a rondavel. Mkize explained that the rondavel-style is kept as it is only in a rondavel that people can perform the ceremonies to communicate with the ancestors when they need to. Another striking image was that of graves on private plots. People are buried at home – something I find very satisfactory.

If you’re looking for an authentic experience, one that exposes you to the everyday lives of rural South Africans, then the Mehloding Adventure Trail is a must. I would even go so far as to say that it’s an essential experience for people who want to understand the lives of others in South Africa.

There is only one improvement I wish for. That the providers, especially the women who run the chalets, become more self-confident. What they’re offering is educational and rewarding.